This program focuses on agriculture and its importance to the region. 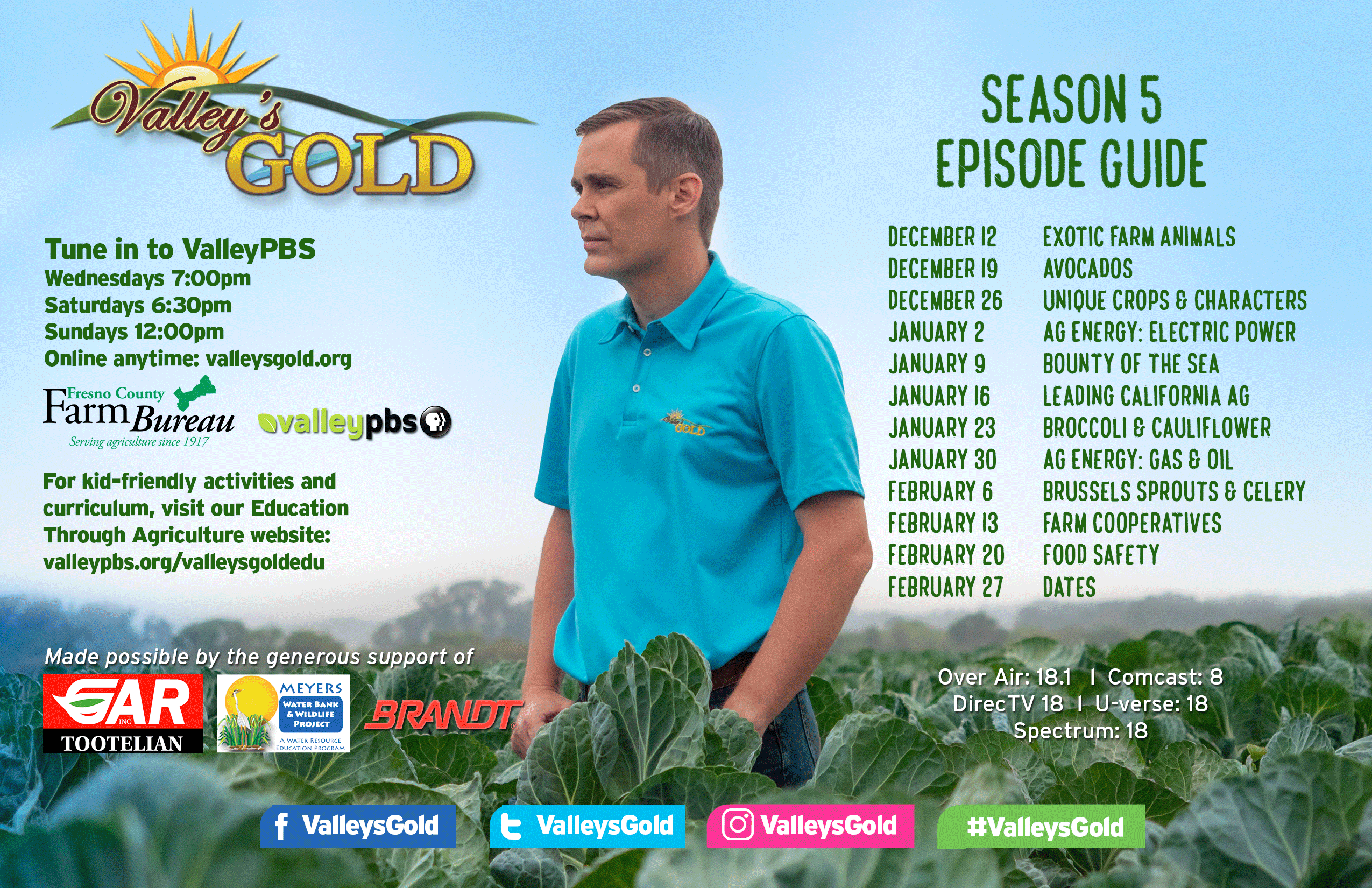 Fresno County Farm Bureau and ValleyPBS are pleased to announce the premiere of the fifth season of Valley’s Gold, a weekly series that presents a behind-the-scenes look at the economic engine that drives the region, agriculture. The show will air Wednesdays at 7 p.m. on ValleyPBS. The program will re-broadcast on Saturday at 6:30 p.m. and Sunday at noon. The new season consists of 12 episodes that will run in consecutive weeks. This season’s topics will include the following:

Viewers will learn about and experience a close-up look at every aspect of the journey crops and commodities take from field to fork across the San Joaquin Valley, and beyond.

Each show is comprised of several segments that demonstrate how crops are planted, tended, harvested and processed. Many episodes include a cooking or consumer segment that utilizes the featured crop.

Fresno County Farm Bureau CEO Ryan Jacobsen is the host of the show. During Valley’s Gold, Jacobsen speaks with growers about their family histories and helps share insight into the various techniques, practices and advancements used in California farming and agriculture.

“California farmers and ranchers are amazing,” said Jacobsen.  “Valley’s Gold helps consumers understand how crops are produced and processed by providing a behind-the-scenes look at the industry.  Viewers will gain knowledge of how important the agricultural industry is and the role it plays in their diet.”

ValleyPBS enriches, educates and strengthens our diverse Valley community through the power of public service media. For 36 years, ValleyPBS has provided PBS signature programming, as well as locally produced shows and is the Valley’s Preschool, Classroom, Stage for the Arts and Lens for Exploration, pointing citizens of all ages to destinations where their interests will be served, their spirits lifted and their voices and perspectives heard. ValleyPBS broadcasts on three channels – ValleyPBS-HD, Valley Create (DIY/lifestyle programming), and Valley Vme (Spanish language). The most up-to-date program schedules and “where you can watch” ValleyPBS in your local community can be found at valleypbs.org.